Fix Your Gaze on Jesus! 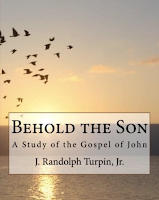 A Study of the Gospel of John, 3rd Edition

Behold the Son has been prepared as a resource for personal study and as a tool for teachers walking their students through a study of the Gospel of John. These pages contain the complete text of the Gospel According to John. The commentary in the footnotes features technical notes, cross references, sermon notes and the author's personal reflections. To further assist in the study, tables have been inserted providing a harmony of the Gospels in those places where such information might prove relevant and helpful.

Dr. Turpin declares this blessing over all who work through this study: "May you behold the Son of God with every turn of the page, with every word that you ponder, and with every prayer that you pray in response to the message of this amazing Gospel."

The 5 Essential Functions of the Church

Build a ministry focused on Kingdom priorities! That's what can happen when the five essentials of church ministry are kept in view. Join Dr. Randy Turpin on this ministry development journey. The course is free, and you can enroll HERE.
at August 28, 2020 No comments:

You are powerful when you allow Christ to be the center of your life. You truly are. My task is to help you tap into that potential.

Why So Many Atheists?

Why are there so many agnostics and atheists?

If you have been transformed by God's grace, you may find it hard to comprehend how people cannot see the evidence of His existence. Perhaps many of them have not yet encountered someone with a convincing testimony of personal transformation. Perhaps the evidence is not yet apparent to them.

In this video presentation, "Living Proof," I draw attention to the life that believers have in the Spirit and how the fruit of this life is the proof that God is real.

The Practices and Symbols of Christmas

Christmas is upon us, and everywhere we turn we are met by the sights and sounds of this festive celebration.

As Christians, this is the time we choose to remember the birth of our Savior. For non-Christians, the season represents other things.

My purpose here is not to bash the secular side of Christmas; rather, I am making the simple point that December is filled with a mix of symbols and practices. Some Christians turn into a Scrooge when they run into an element of the season that cannot be found in the Bible. That's not me. Now, some things should probably be discarded, but not all of it.

We could talk about mistletoe, holly, reindeer with glowing red noses, decorated trees, candy canes, and presents, but let's just focus on Santa for the moment.

I know. The guy in the red suit is quite a departure from what Christmas is all about, but he is based on a real historical person—Saint Nicholas.

Nicholas was a bishop/pastor in a place called Myra. Having inherited a fortune from his father, he became a benevolent man noted for his good works. Miracles were even associated with him. Although parts of the story might be exaggerated, reportedly, three dead boys were raised back to life through his ministry. Eventually, Nicholas was imprisoned during the Diocletian persecutions.

Remembrance of Nicholas was preserved best in Holland, where he was remembered as Sint Nikolas or Sinter-Klaas. The celebration of his life on December 6th of each year had no connection with Christmas. His traditions (such as the tradition of gift-giving) were taken to New Amsterdam (now New York) by Dutch colonists in the 17th century.

So, what am I saying? Honor the saintly bishop, but don't confuse that with the heart of what Christmas really means. Recognize that many of the popular symbols and practices of this season have nothing to do with Jesus, but don't become a Scrooge!

In all humility, we must acknowledge that we don't even have the religious side of Christmas exactly right. For instance, Jesus was born in the springtime—not December 25th. The Bethlehem "inn" was a guest room in a relative's house—not a first century version of Motel 6. The stable was likely an underground room in the back part of the same house—probably the cleanest area, because animals were outside that time of the year. The manger was made of stone—not wood, and the wise men arrived many months after Jesus was born—not on the night of His birth.

Don't worry about the details. The important thing is to come before Jesus with worship and adoration, and join in on the declaration that the angels made on the night of our Savior's birth: "Glory to God in the highest heaven, and on earth peace to those on whom his favor rests" (Luke 2:15, NIV).

May the month of December be filled with all of the joy that Jesus brings!

First, remember that this day is all about giving thanks to God. Second, it is also a good time to say “thank you” to others. What are you thanking God for?

In the Name of Jesus

We hear that phrase frequently in Christian circles. It's in some of our songs. It's how we close our prayers, and it's the tag we use on almost anything that needs to sound spiritually authoritative.

But what do we really mean when we say, sing or proclaim, "In the name of Jesus"?

J. Randolph Turpin
I am first a Christian, a husband, a father and a grandfather. I am also a preacher, a revivalist, an educator, an administrator, an author, a publisher, a conference speaker, a ministry and leadership development consultant/coach, and a lifetime learner.